A Beginner’s Guide to the VW t6 Camper

Volkswagen campervans are the first choice for many campervan conversions, including ourselves, and for good reason. The renowned German car manufacturer has been part of the campervan movement for decades going all the way to the classic VW T2. The VW Transporter T6 camper is the current model built by this auto giant and it packs in all the best parts of its previous models to offer customers the very best in space, performance, and safety.

The Differences Between the VW T5 and the VW T6 camper

The T6 and T6.1 models build on the success of VW’s Transporter. The T6 models were released in 2015 as a replacement to the T5 with the improved T6.1 rolled out in 2019; a full 70 years since the Transporter line started. So what does the T6 have that the T5 doesn’t?

One of the biggest changes between the T5 and the T6 is under the bonnet. Newer model Euro 6 engines are more efficient and more efficient ranging from 84PS, 102PS, 150PS and 204PS. Some of these engines also make the most of VW’s TDI engine technology offering a large increase in performance. The T6.1 goes even further with fewer emissions and the trademarked AdBlue® system which neutralises harmful exhaust fumes.

Small Changes to the Body

VW has seen fit to keep the body changes to a minimum. This means that whether you have a T5 or a VW T6 camper model, finding parts for body repair should be fairly straightforward for the next several years. The fully galvanised shell is robust and long-lasting and makes the perfect canvas for us to create modern campervans built for the great outdoors.

With that said there are small details that make the T6 its own. Tweaks have been made to the lights, bumper, and bonnet to make the T6 stand out. VW has also moved the aerial from a central location to allow for easier roof alterations like sunroofs or pop tops.

VW’s Automatic Post Collision Braking System applies the brakes automatically after a collision to reduce the chances of a second collision while the Front Assist helps reduce the risk of crashes by calculating your speed and the distance to the vehicle in front to give you an early warning system to brake. It can also apply the brakes automatically to avoid crashes. Finally, the Tyre System Assist keeps a close eye on your tyre pressures so you know the second you have a flat.

As you can see VW has put a lot of thought into the Transporter range to keep older models relevant while improving on performance, safety, and appearance on newer models. This means whether you’re looking for a bargain on an older T5 or want to upgrade to a custom VW T6 camper; there is a lot of choice to suit all budgets. As professional camper converters, we are well-versed in what makes VW’s Transporter range tick and specialise in improving on these incredible vehicles with masterful upgrades and clever improvements.

What We Do to Improve on VW’s Work

Our VW conversions make the most of the latest styling, storage solutions, performance, and creature comforts to create vehicles ideal for outdoor living. Through our various packages, we transform your van into a completely bespoke mobile home tailored to your needs. From adding smart storage to installing beds, kitchen appliances, and creature comforts, we use the robust and reliable T6 and transform it into a high-spec adventure vehicle. 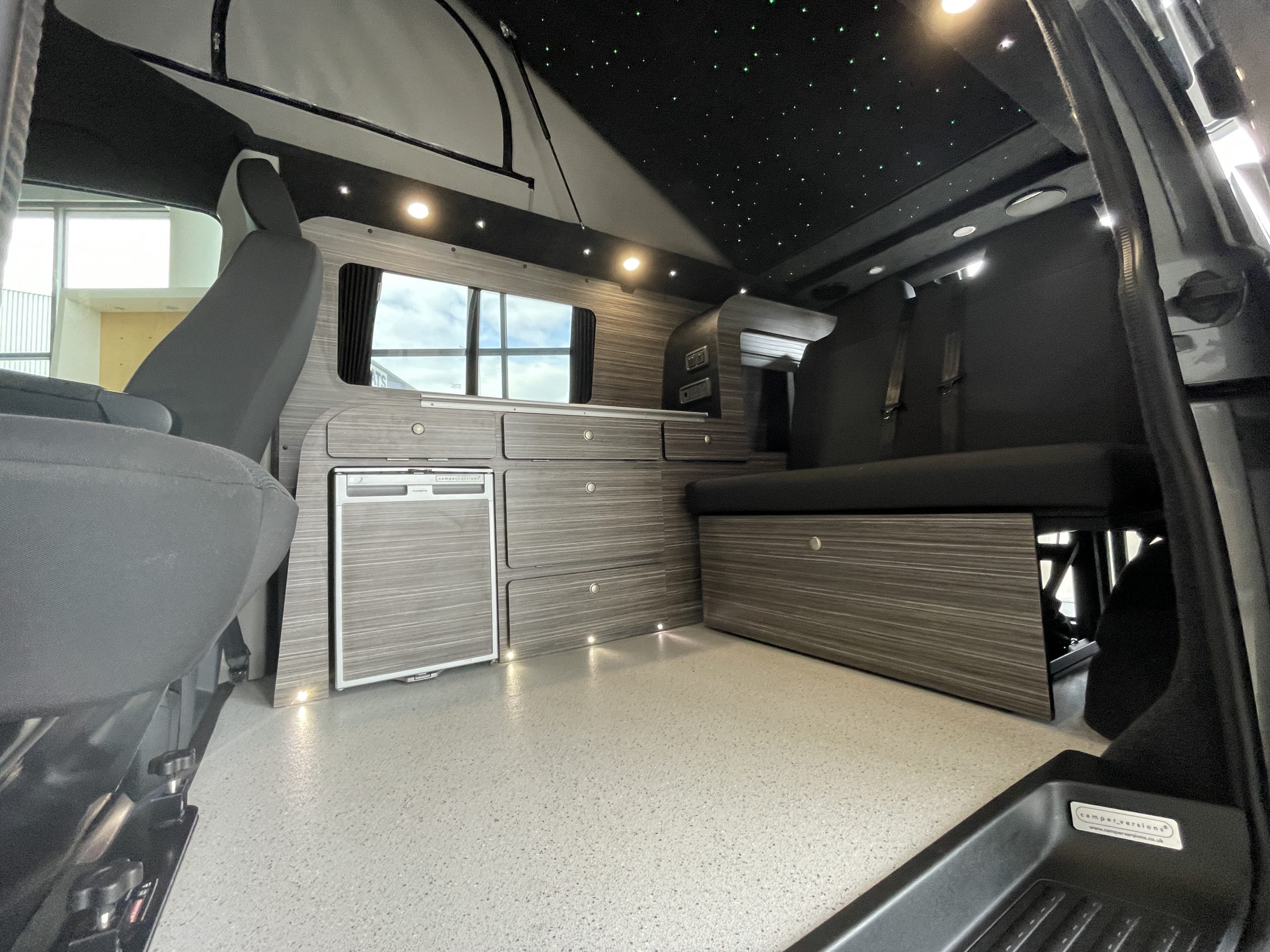 We can also make your camper stand out with our exclusive CV Style pack. This style pack completely transforms your vehicle with locking wheel nuts, 18” alloys, and load-rated tyres as well as sidebars and Sportline front bumper. We also lower the ride height by 40mm to give your van a sportier profile without affecting the ride quality. To complete the package and highlight the quality of the T6’s lineage we add bespoke trim, brake callipers and can even reupholster the front seats in high-quality automotive vinyl in exclusive VW GTi Tartan or one of our custom stitching patterns.

If you’re interested in finding out more about our camper_versions® packages by contacting us today. We’re ready to help you make the most of adventure and create a unique VW campervan that fits your needs. View our range of VW T6 campers for sale.